Sk8mafia was born in California and is one of those brands that are born almost for fun and out of curiosity. In the early 2000s, two Californian college student skaters find themselves having a project that will mark their lives.
The Skatemafia project was born as a study exam by skaters Josh Priebe and Dan Connelly. Two common guys who have combined a passion for skateboarding with their studies. After the exams passed with flying colors, the two friends begin to produce small quantities of products locally and find skaters for the team that was starting to be born.

Sk8mafia begins to take shape thanks to the commitment of the two young friends who, after their studies, have launched into this project.
First and foremost remember that the skatemafia logo is a very original thing. Few special people with an extreme design sense could come up with such a logo. Thus was born the logo with two hands that with the fingers create the S of Skate and the em of Mafia.
In addition to having an iconic logo from day one, the brand has had an unexpected success all over America. This success pushed the two friendly skaters not to stop and create a world-class brand.

Sk8mafia starts to get more and more popular. The brand is distributed and is part of Blitz distributiopn which has created brands such as Momentum, JSLV clothing, Black Label, Hooks up and Fury trucks. Very hype brand in the early 2000s.
Since its inception, T-shirts, sweatshirts and boards with the legendary sk8mafia team logo house were sold out all over America and in a short time Sk8mafia arrived in Europe where it was also very successful in the old continent.

Already in 2004 the first Sk8mafia video called “way of life” was released with a really hype team with names of the caliber of Peter Smolik, Tyler Surrey, Kellen James, Tommy Cantrell and of course the boss Dan Connelly.
Hip hop music is a must in this video, which goes very well with the skatemafia brand. The level of the tricks of the video is very high with rails, ledges and walls of all kinds. The team begins to understand that the two friends’ project is truly a winning card.

Sk8mafia produced weekly videos where clips of the tam were shooting continuously. In 2009 the team is in shape and at the peak of power with skaters like Wes Kremer, Nick Tucker, Jamie Palmore, Marshall Heat and all the others from previous years.
All these top pro skaters perform incredible tricks in all the videos that will be released for Sk8mafia in the following years. Furthermore, since the release of the Skatemafia brand, videos are produced called “saturday videos” which show the progress of the team. Technical tricks and street life scenes are a must for a brand called skatemafia.

Other videos arrive like in 2013 when “Sweetmafia” comes out, a video collab with the European pros of the Swedish brand sweet skateboards.
The video shows pros like Daniel Spang, Josef Scott Jatta, Gustav Tonnessen, Koffee Hallgren and Anthony Myhrvold.

SK8MAFIA AND WES KREMER SKATER OF THE YEAR

Especially 2014 is the year of Wes Kremer who is at the peak of his career. Receives the thrasher “skater of the year 2014” award. Kremer has extremely technical and powerful skateboarding. Trick down by handrails and ledge are a must for this sk8mafia pro skater.
The video of thrasher crowning Kremer the king of 2014 will be released. Rightly deserved, this award has still helped the sk8mafia brand that continues to be successful.

SK8MAFIA DECK MADE IN EUROPE

Ska8mafia has made many collaborations with brands such as independent and dc shoes. from 2010 to today the team consists of skaters such as Jamie Palmore, Tyler surrey, Wes Kremer, Heat Marshall, Jimmy Cao, Kellen James, Brandon Turner and Alexis Ramirez.
To stay informed about the sk8mafia team and its team riders visit their instagram page .
If you want an original and powerful brand, Skatemafia is for you. Choose your table from our catalog and buy safely on our online site. We ship your table in 24 hours. Free shipping over 75 euros.

If you have any problems or questions for us, do not hesitate to contact us by mail or by phone. We help you find the perfect set up for you. Read our articles on the skate dictionary and learn all about skateboarding.
Sign up for our News letter to receive discounts, promotions and stay informed about our arrivals. 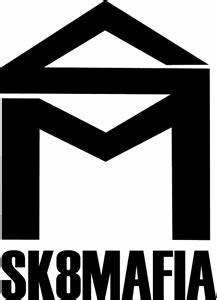